The heritage of sturdy Polish stock was brought to Stevens Point and Portage County many, many years ago by a man who has lived to celebrate his 101st birthday and who can yet out-walk some of much younger years.

John Mansavage, 932 Franklin St., who can boast of his own teeth, his own hair, a handsome beard and good health, passed the 101 mark this past week. And he is a daily worshiper at mass at St. Peter’s Catholic Church, a practice he has followed for many years, walking the 12-block round trip. 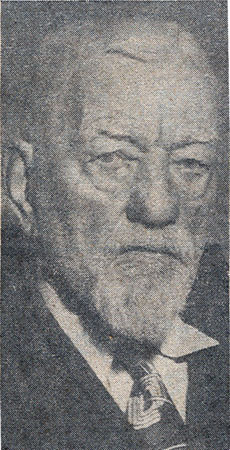 Although his energy for yard work and other odd jobs about the home, where he lives with his son and daughter-in-law, Mr. And Mrs. Edward Mansavage, has lessened since his 100th birthday, he is still able to be about and care for his own needs.

During his 101 years, Mrs. Mansavage has been a patient at the hospital only once and has required very little medical treatment. The only physical trouble he has now is with his feet; he has to use a cane.

Mr. Mansavage was born in New York on June 24, 1857, the son of the late Mr. And Mrs. Jacob Mansavage. He came to Portage County as a boy with his parents, who located on a farm in the Polonia vicinity. He was married to the former Josephine Levandowski 69 years ago, on May 20, 1889, at St. Peter’s Church.

After their marriage, the couple lived on a farm near Custer for five years and then in Milwaukee for seven years. In Milwaukee, Mr. Mansavage worked for a street car company.

They then returned to Stevens Point and lived at 930 Franklin St., the homestead of Mrs. Mansavage’s parents, which they purchased. Since his wife’s death on Feb. 10, 1944, Mr. Mansavage has made his home with his son and daughter-in-law, next door to his own home.

After coming to Stevens Point, Mr. Mansavage worked for the Soo Line Railroad for a short period, was a city employee for a time and then was hired by the Stevens Point Beverage Co., where he worked for 18 years prior to his retirement many years ago. His two sons living here, Mike and Edward, have followed in his footsteps and are employed by the beverage firm. Mr. Mansavage, who is believed to be the oldest resident in point of age in Stevens Point, was the father of 18 children, including triplets and a pair of twins. The triplets were among six of the children who died in infancy.

The living children are Mrs. J. J. (Martha) Reynolds and Bernard Mansavage, Chicago; Julius, Jerry and Stephen Mansavage and Mrs. Cecil (Mayme) Coats, Milwaukee; Mike and Edward, Stevens Point, and Felix, whose address is unknown. Mrs. Coats and Stephen are the twins. There are 28 grandchildren and seven great grandchildren.